In its continuing bid to empower and uplift the lives of those in the marginalized sectors, the Technical Education and Skills Development Authority has recently launched the National Integration Scholarship Program or NISP.

The TESDA chief says that due to poverty, many IPs, rebel returnees and Muslim Filipinos have not been able to finish school and will be best served by government programs such as the NISP.

“Mindanaoan people must take advantage of the development programs for IPs since our President, Rodrigo Roa Duterte, who hails from Mindanao and also has an indigenous people’s blood running through his veins, has poured out billions of pesos of priority programs and projects to uplift the quality of life of his constituents," Mamondiong adds.

Agreement with the NCIP

The implementation of the free skills training program is contained in the memorandum of agreement (MOA) signed between Mamondiong and Leonor T. Oralde-Quintayo, chairperson of the National Commission on Indigenous Peoples (NCIP) last Feb. 28, 2017.

The various training programs under the NISP will be from 16 industry sectors such as Agriculture, Automotive, Construction, Tourism, Metals and Engineering, Heating, Ventilations, Airconditioning and Refrigeration, and others.  The duration of these courses can be as short as 5 days, for Conduct of Field Assessment (Leading to Pest Management), or as long as 160, in the case of Aquaculture NC II.

Graduates of the NISP will only be allowed to avail of the scholarship once but will still be eligible to apply for other TESDA scholarship programs.

Courses to be offered in the different localities will be determined by TESDA and its partners based on the development needs of the communities, ancestral domains and the training needs of rebel returnees. 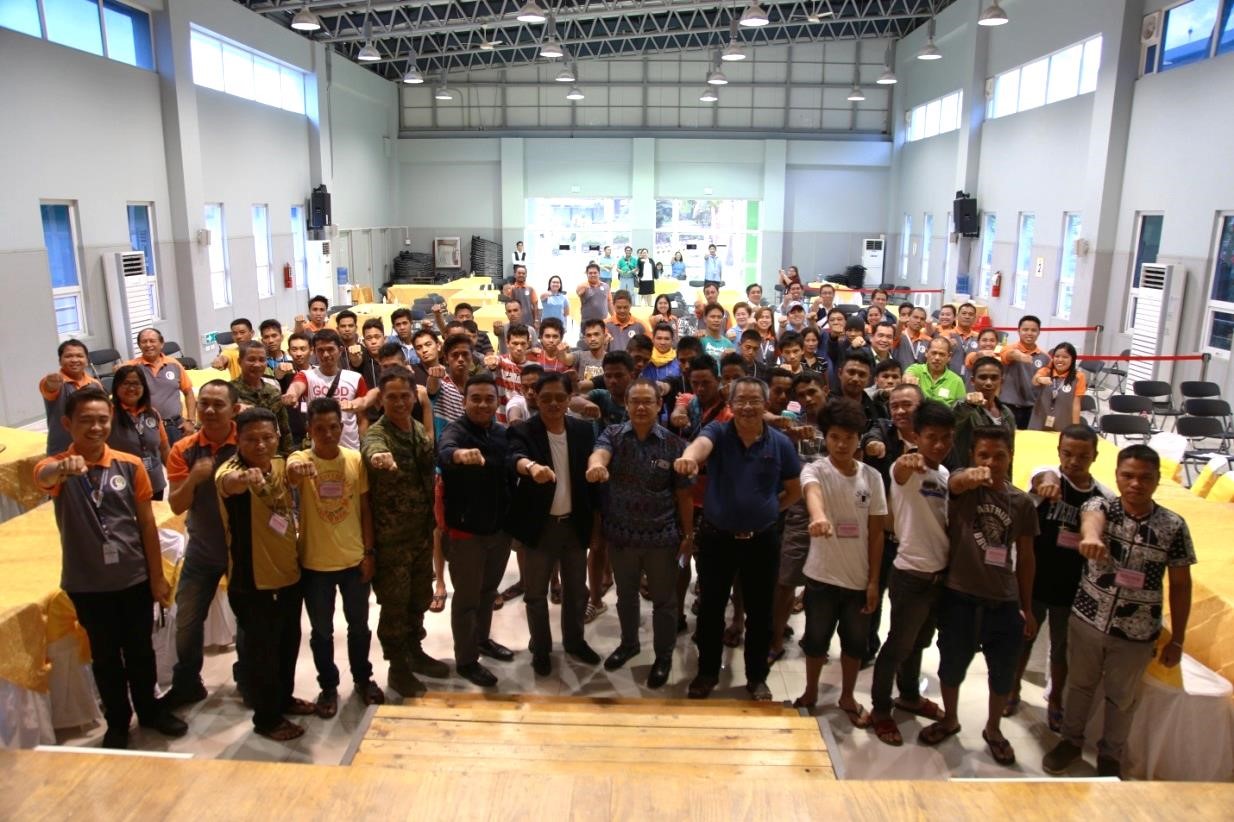 The implementation of the NISP was first formally announced to the public on February 16, 2018 at the Regional Training Center-Korea Philippines Vocational Training Center (RTC-KPVTC) during a ceremony led by Sec. Guiling “Gene” Mamondiong for Regions 11 and 12. The event was attended by officials from the National Commission for Indigenous People (NCIP) and Office of Muslim Affairs (OMA), tribal leaders from Davao and SOCCSKSARGEN, and the regional and provincial directors of TESDA.

Over 200 Indigenous people, rebel returnees and Muslim Filipinos attended the launch and were briefed on the scholarship programs of the agency and how these can be availed. During the same day, the training center facilitated the enrolment of 45 rebel returnees from Region 11 in Automotive Servicing NC II and Civil Technology.

The TESDA chief said that he expects that through the NISP, these groups of individuals will be empowered and become more productive members of society. Some 600 IPs, rebel returnees and Muslim Filipinos from the Regions 11 and 12 are expected to benefit from the NCIP. 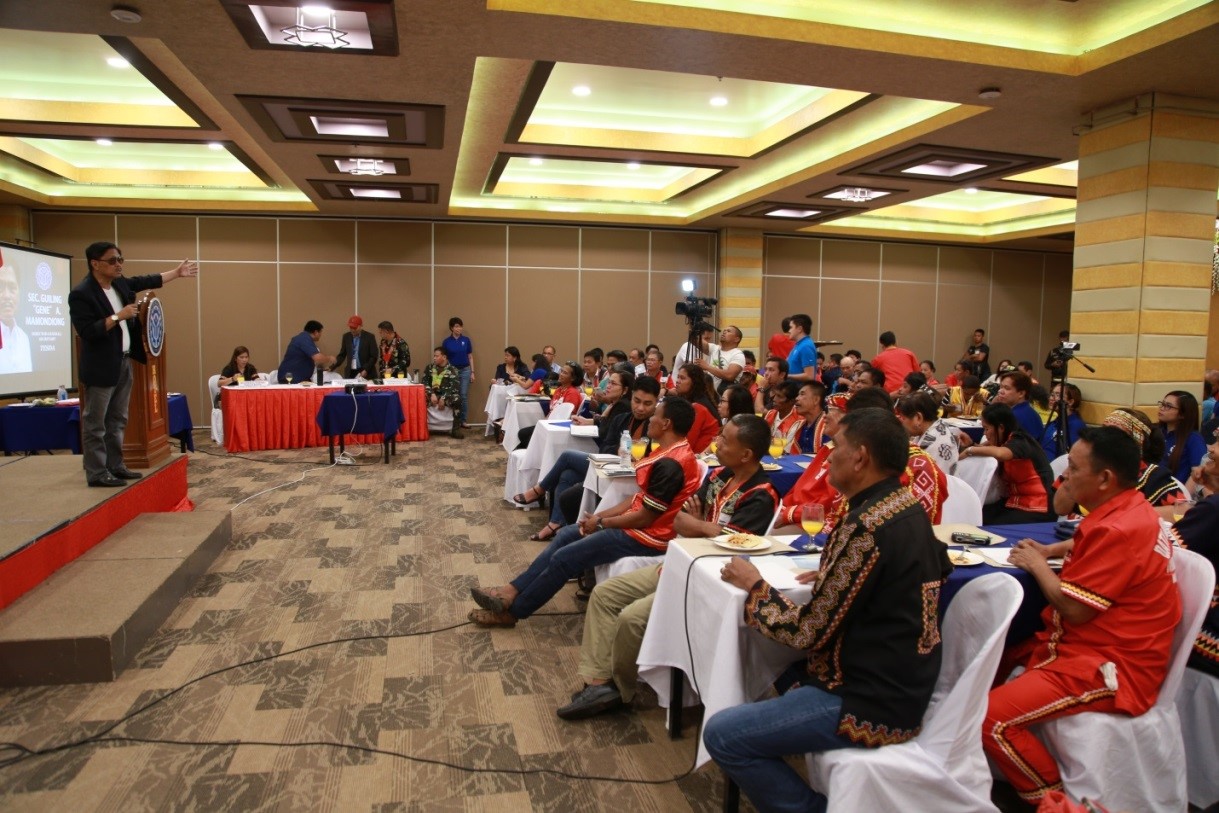 For the Caraga region, the NICP was launched on February 17, 2018 during a ceremony at the Grand Palace Convention Center in Butuan City.  With the theme “Pagpagahum sa Tribuhanong Katilingban pinaaagi sa Kahiusahan alang sa Kalinawan ng Kalambuan” (empowering tribal community through unity for peace and development), the event was participated by 136 chieftains of the Northern Mindanao Region and Caraga Administrative Region.

Speaking before the tribal leaders, Sec. Guiling “Gene” Mamondiong said that the NICP is the result of a directive from President Rodrigo Roa Duterte to give opportunities to the marginalized sectors, including IPs and rebel returnees, through skills training.  He also said that beneficiaries that successfully complete the training will be provided with livelihood opportunities through the convergence of different government agencies. 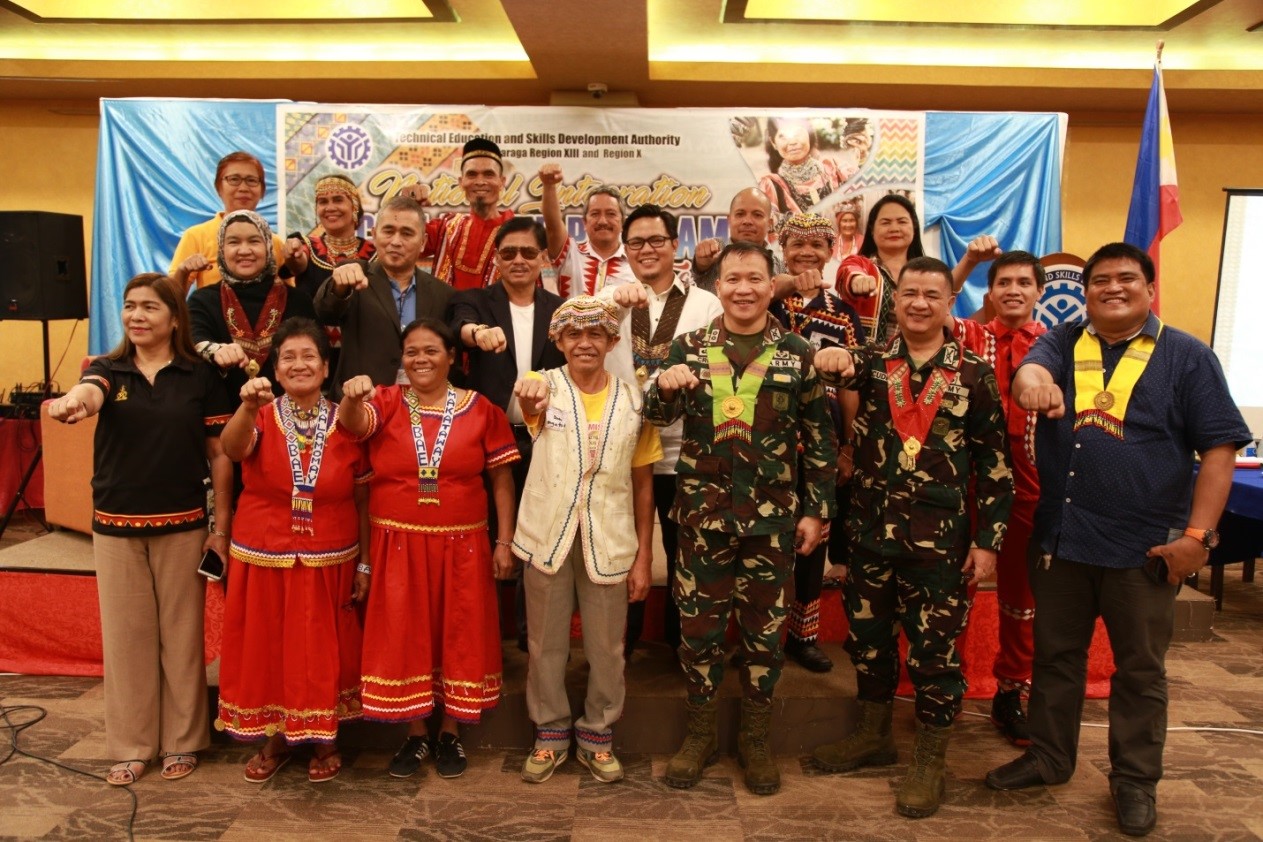 During the event, Sec. Gene approved the release of Php 10 million for the construction of a Provincial Training Center with dormitory in Agusan del Sur. 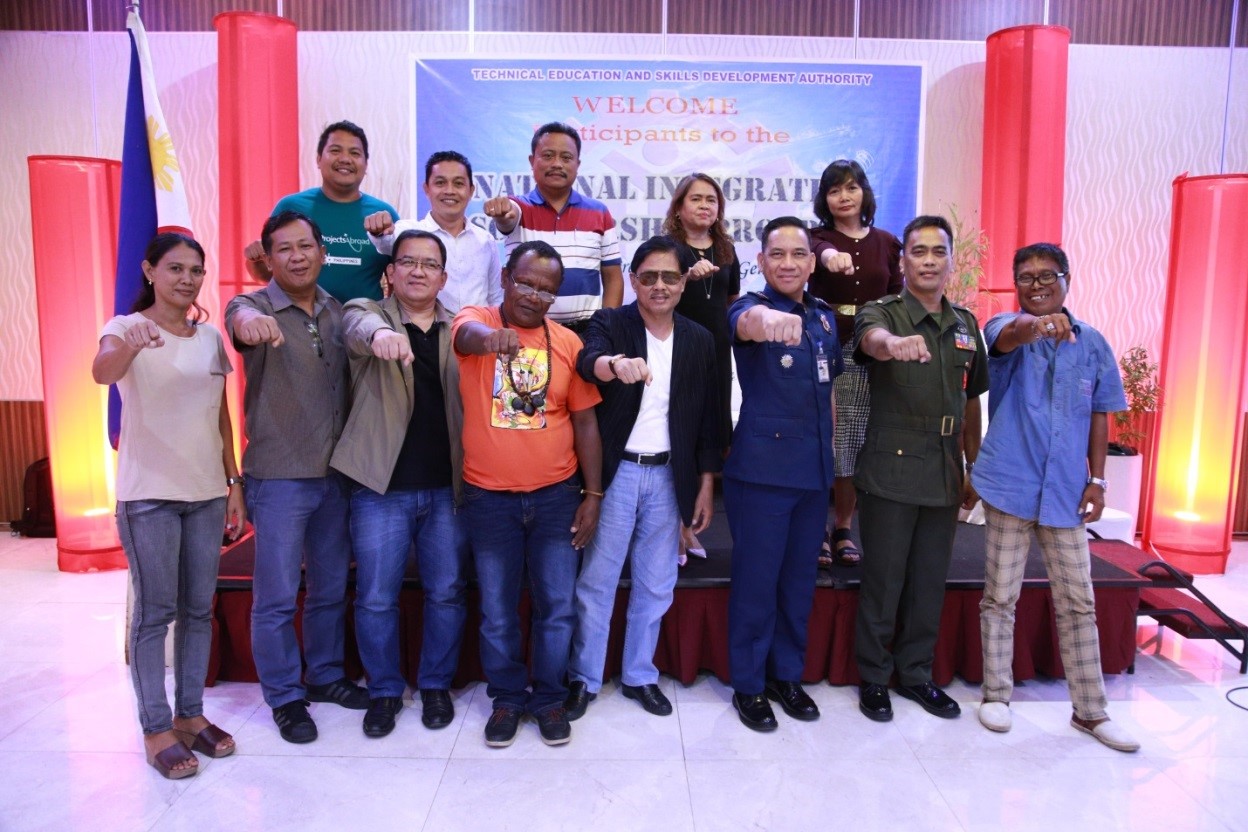 On the third leg of a series of nationwide launchings, the NISP was formally presented in Regions VI, VII and VIII on February 18, 2018 at the Golden Prince Hotel and Suites, the Cebu City.  In his message, Sec. Guiling “Gene” Mamondiong said that TESDA has expanded and strengthened its delivery of services and programs particularly for the indigenous peoples (IPs), who are considered the most disadvantaged sector in the country.

During an open forum, it was identified that for the Visayas Region, there are a total of 208,108 IPs belonging to two (2) ethnic groups.  Representatives from the National Commission for Indigenous People (NCIP), Armed Forces of the Philippines (AFP) and Philippine National Police (PNP), and tribal leaders as well as TESDA regional and provincial directors attended the event. 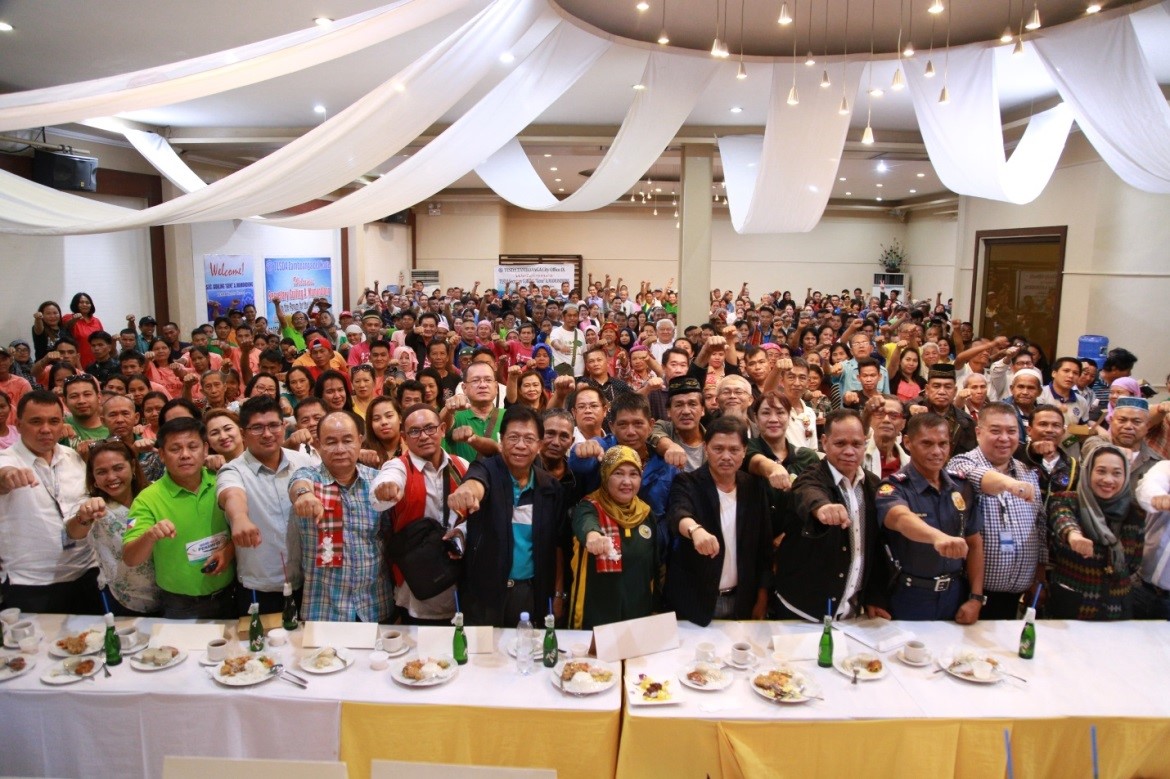 IPs, Muslims and those in marginalized sectors in Region 9 and ARMM were also gladdened to hear of the NICP during its launch on February 19, 2018 at Hotel Guillermo, Pagadian City.  Together with TESDA, the event was done in coordination with the National Commission on Muslim Filipinos, National Commission on Indigenous People and Department of Interior and Local Government. 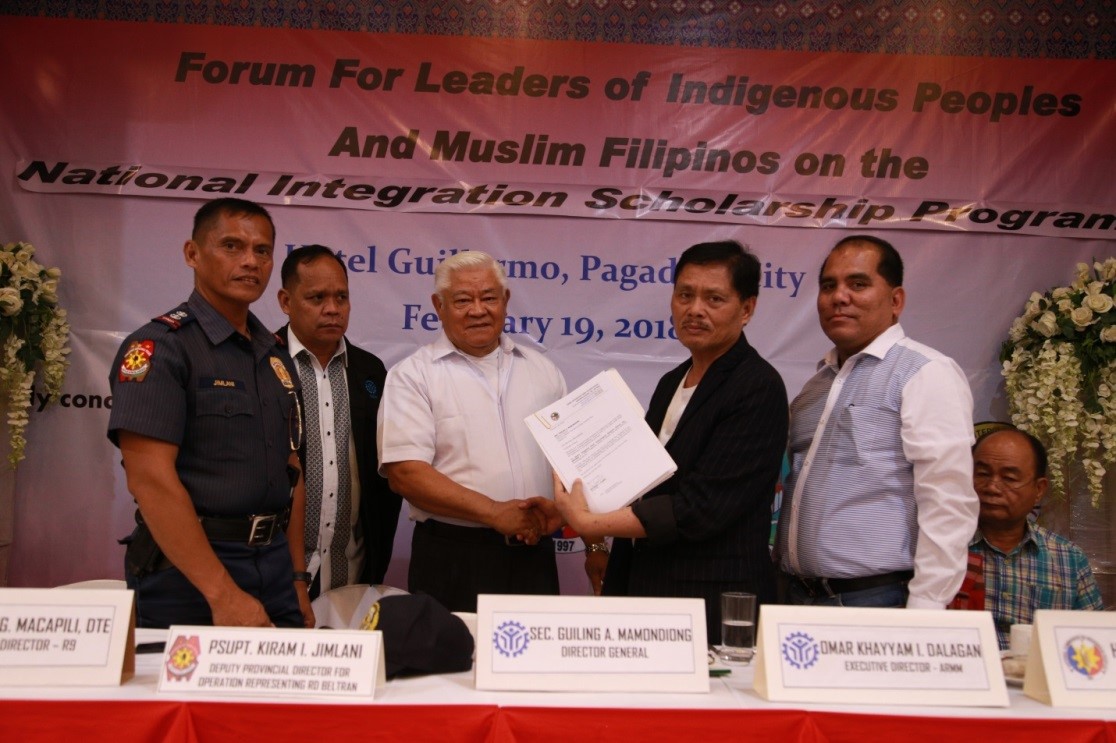 “Ibibigay sa inyo ang dapat sa inyo,” the TESDA chief promised to the applause of some 450 participants.  The Secretary also announced the establishment of training centers right in the communities as well as the provision of free meals and accommodations on top of the free skills training and assessment already provided under the Training for Work Scholarship Program (TWSP).

More than 300 IPs and Muslim Filipinos attended the launch of the NISP in Regions I, II and CAR on February 21, 2018 at the Venus Parkview Hotel, Baguio City.  During his speech, Sec. Guiling “Gene” Mamondiong said that under the current administration, marginalization of IPs will not be allowed nor tolerated.

“Since education is the great equalizer, TESDA will bring education to the IPs through the NISP,” promised the TESDA Secretary.

The Mamondiong also assured TESDA’s facilitation of employment and livelihood programs for its graduates, with the support of other government agencies like DA, DTI and DAR.  Sec. Gene announced that together with the National Commission on Indigenous Peoples, the agency will put-up a skills training court in each province. 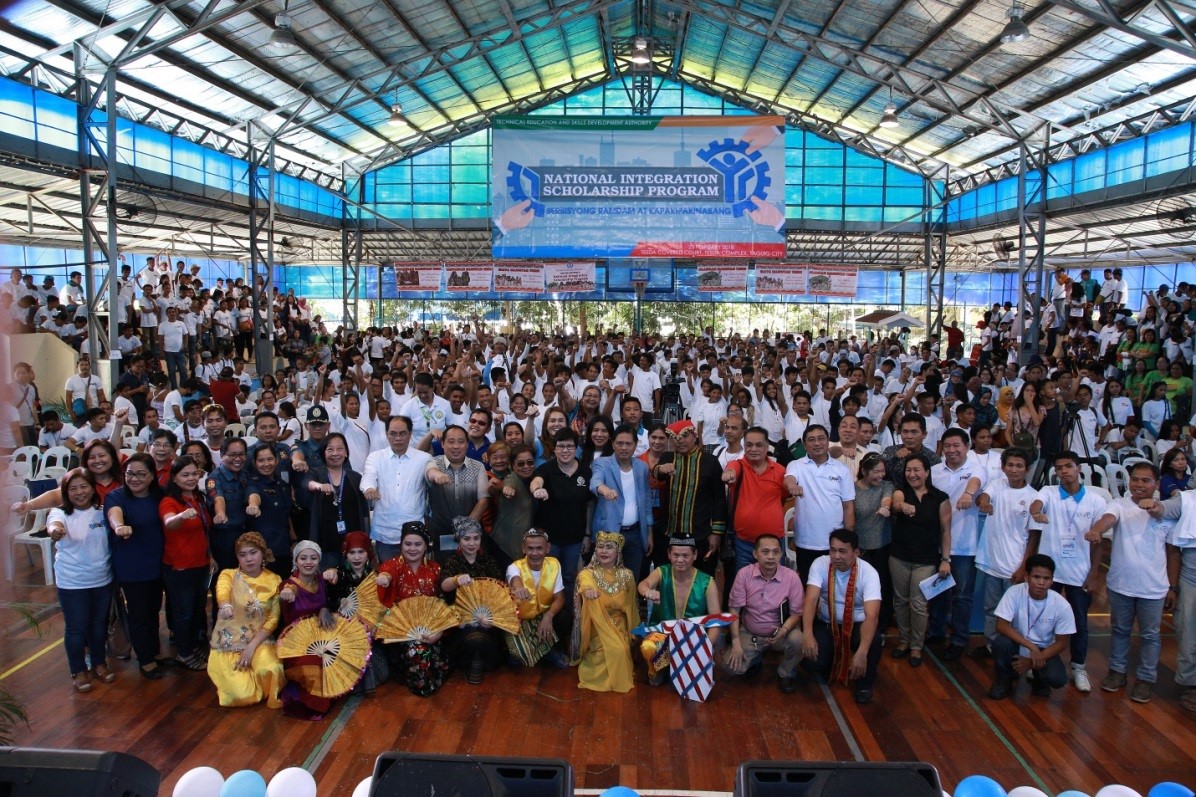 Apart from the signing of the manifesto on the skills training programs, participants to the event were also treated to activities like an orientation on various TESDA scholarship programs, free haircut and massage, product demos, and cultural presentations. 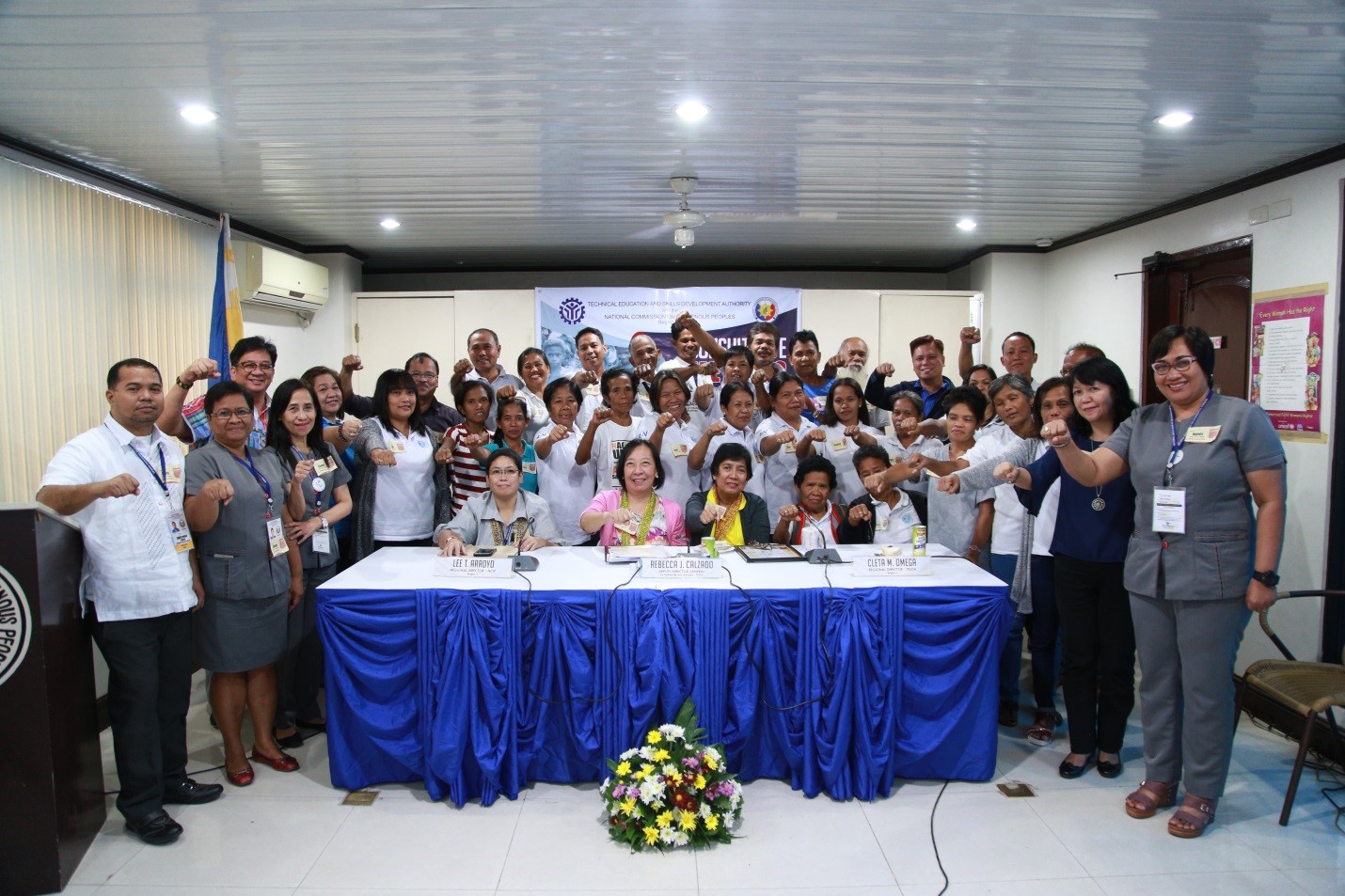 Finally, in the Bicol Region on February 26, 2018 at the NCIP Function Hall in Iriga, around 25 IP elders/leaders from the province of Camarines Sur joined TESDA Deputy Director General for Partnerships and Linkages Rebecca J. Calzado and other TESDA V regional and provincial officials for a consultative meeting and ensuing press conference.  DDG Calzado shared her desire for a school of living traditions be established in the Bicol Region to improve and sustain whatever traditional socio-economic activities are currently being pursued among IP communities.